OUR NEXT SESSION OF INTRO TO SCOUTING IS NOW ENROLLING! Enroll now
MENU 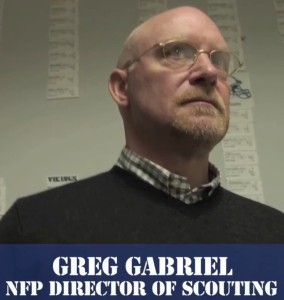 Greg is a veteran of 29 NFL seasons

WHO: The NFP scouting series will be taught by former Chicago Bears Director of College Scouting Greg Gabriel. Greg is a veteran of 29 NFL seasons. He started as a part-time scout with the Buffalo Bills in 1981. In 1984 he became an area scout for National Football Scouting and then was hired by the New York Giants in January of 1985. Gabriel was with the Giants for 16 seasons and worked with some all time great NFL coaches and personnel people including George Young, Bill Parcells, Bill Belichick, Dan Reeves, Tom Coughlin and Ernie Accorsi. While in New York, the Giants won three NFC Championships and two Super Bowls (XXI and XXI). Also, 12 first round draft picks came from Gabriel’s main areas of responsibility. In June of 2001, Gabriel left New York to become Director of College Scouting for the Chicago Bears. During his nine seasons with Chicago, the Bears went on to win three Division Championships, one NFC Championship and were an NFC wildcard team twice. Nine of the Bears draft picks went on to the Pro Bowl under Gabriel’s direction.

WHAT: The course is designed for six weeks. Each week you’ll receive assigned reading, lectures from the accompanying DVD, and multiple choice quizzes. Then, take your knowledge to the NFP Scouting online community, where you can ask questions of Greg and the NFP team, share your own scouting reports, and engage with other classmates. The class will improve your knowledge of the game while providing a basic foundation of the fundamentals of scouting. Your purchase includes: 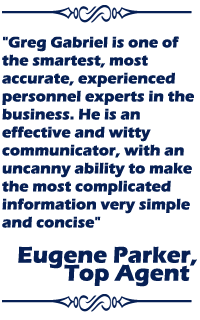 Students will learn:
-The language of scouting, and the insider terms used by the industry
-The correct way to write an NFL scouting report
-How to properly watch and evaluate film
-Evaluation criteria for each separate position group
-Tips on how to break into different aspects of the business of football

WHY: Whether you want to coach, be a referee, an NFL or college scout, agent, or front office executive, be a part of the media, start your own scouting blog, or even just become a smarter fan, this class will arm you with the knowledge you need. This class is like no other in the marketplace, and has been in the making for two years. Comparable classes with less experienced instructors cost about $1500. Our offering, by comparison, is a superior value. The NFP team is dedicated to delivering the best possible experience.

WHEN: Though DVD and book based, the class lasts 6 weeks. Each week, Greg and our team will guide you and answer your questions on that week’s assignments. There are no defined class dates and times. So don’t worry about having to be at a certain place at a certain time. Learn on your schedule each week.

Enroll in our next session!
More

I still have more questions

E-mail us, and we'll answer you promptly!
More

I'm not interested at this time, but take me back to National Football Post for the latest news and analysis!
More